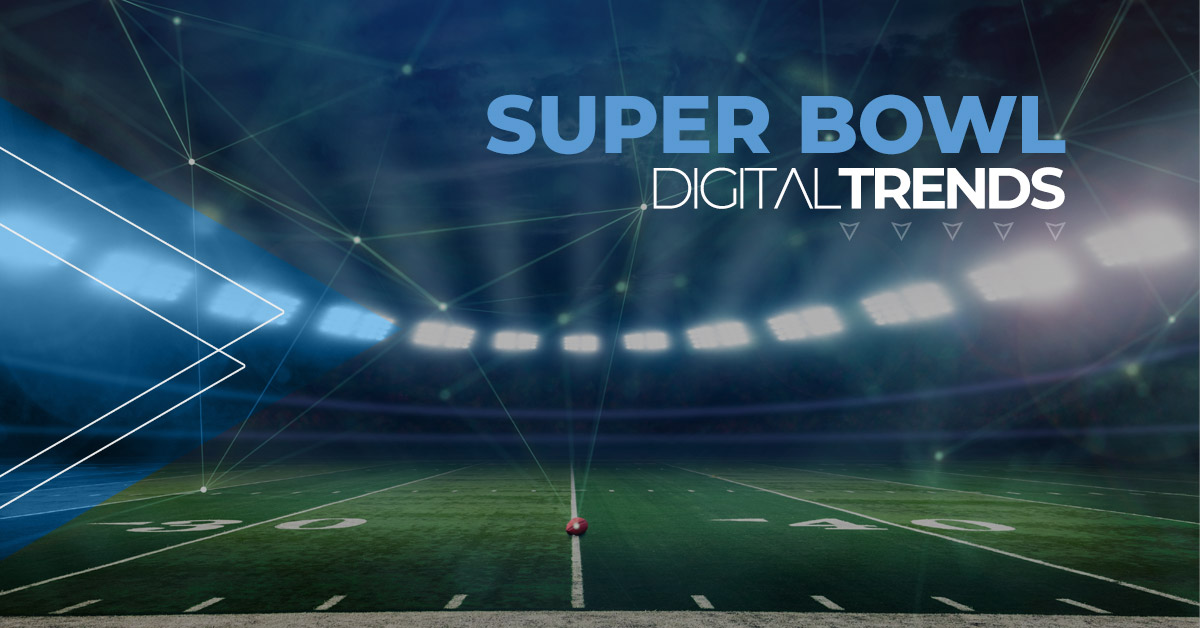 Super Bowl Digital Marketing; Trends Inform Strategy
Months of planning and execution will soon culminate for major companies looking to cash in on the clout produced by the Super Bowl. This year’s NFL Title game will be the 56th installment, played between the Los Angeles Rams and Cincinnati Bengals, on February 13, 2022, inside SoFi Stadium in Los Angeles. Viewership of the game may have peaked in 2015 when 115 million people tuned in to a New England Patriots win over the Seattle Seahawks. Still, the Super Bowl remains one of the steadiest and most sought-after advertising events in the world. As of 2020, a 30-second ad costs 5.6 million, and this year’s figures are reportedly topping seven million. While the buzz belongs to the big brands who brandish witty and expensive commercials, there are opportunities to seize in the Super Bowl digital marketing space.

How to Capitalize on Super Bowl Frenzy

Foresight is essential, mainly when producing a blog or multimedia content. Allocating a portion of the editorial calendar for evergreen content is critical, but topical posts allow for increased relevancy and engagement with readers. CMOs can effectively and efficiently capture some of the pre-buzz and ramp-up interest surrounding a topic by simply planning.

In this case, the Super Bowl.

By looking at September 2020 to May 2021 on Google Trends, we can see a ramp-up period around the term “Super Bowl” during January before exploding in the days before the event on February 8.

Publishing a post connecting a company, brand, or services to the Super Bowl in the weeks and months leading up to the big game allows that content to establish credibility with the search engines. Then, with interest increasing, there is a greater likelihood that if search queries pertain to the content’s primary and secondary keywords, they will surface at the top of the results page.

In this instance, the best period to target fresh, original content with keywords relating to last year’s Super Bowl would have been between December 27 and January 23.

We looked at the last five years of data in Google Trends for Super Bowl terms and their associated seasonality. Search interest has been proportioned to a scale from 1-100 with 100 representing the peak interest for the term over the five-year span. Additionally, each of the following graphs will display a compounding effect in the y-axis. What we found is a mix of predictable results and some surprising correlations.

Let’s start with the game itself, and to no one’s surprise, the interest in the Super Bowl, Super Bowl Halftime Show, and Super Bowl Commercials peak the week of the big game each year. One interesting find is the dip in interest for last year’s game. After a four-year period of increasing interest in the NFL title game, interest curbed in 2021. 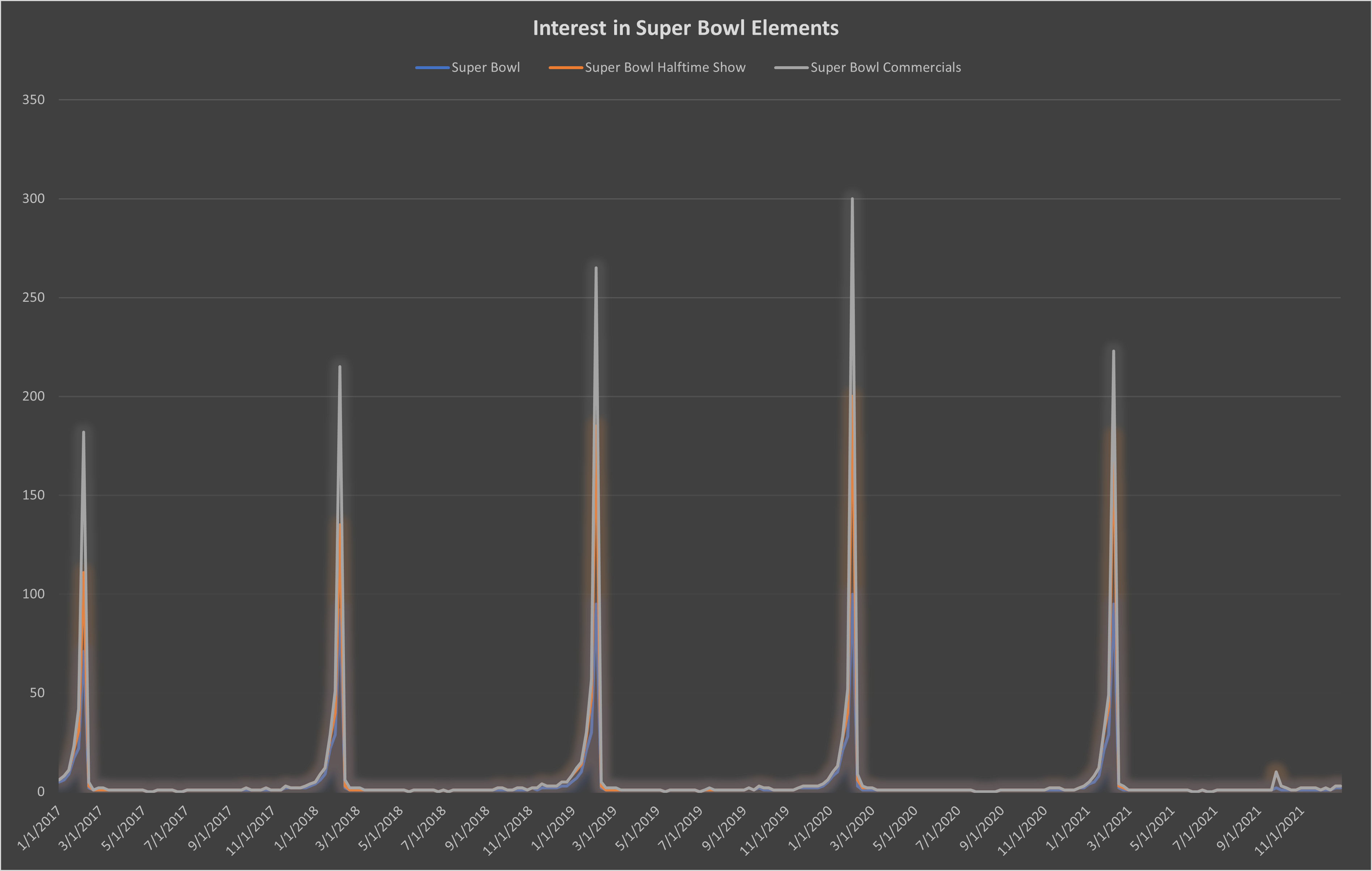 Next, we are looking at a scatter graph of interest in the teams involved in the last five Super Bowls. Due to appearing in three straight championship games from 2017 to 2019, the New England Patriots are routinely found at the top of the chart. However, once recently retired Tom Brady departed for the Tampa Bay Buccaneers, interest in Tampa Bay increased exponentially. 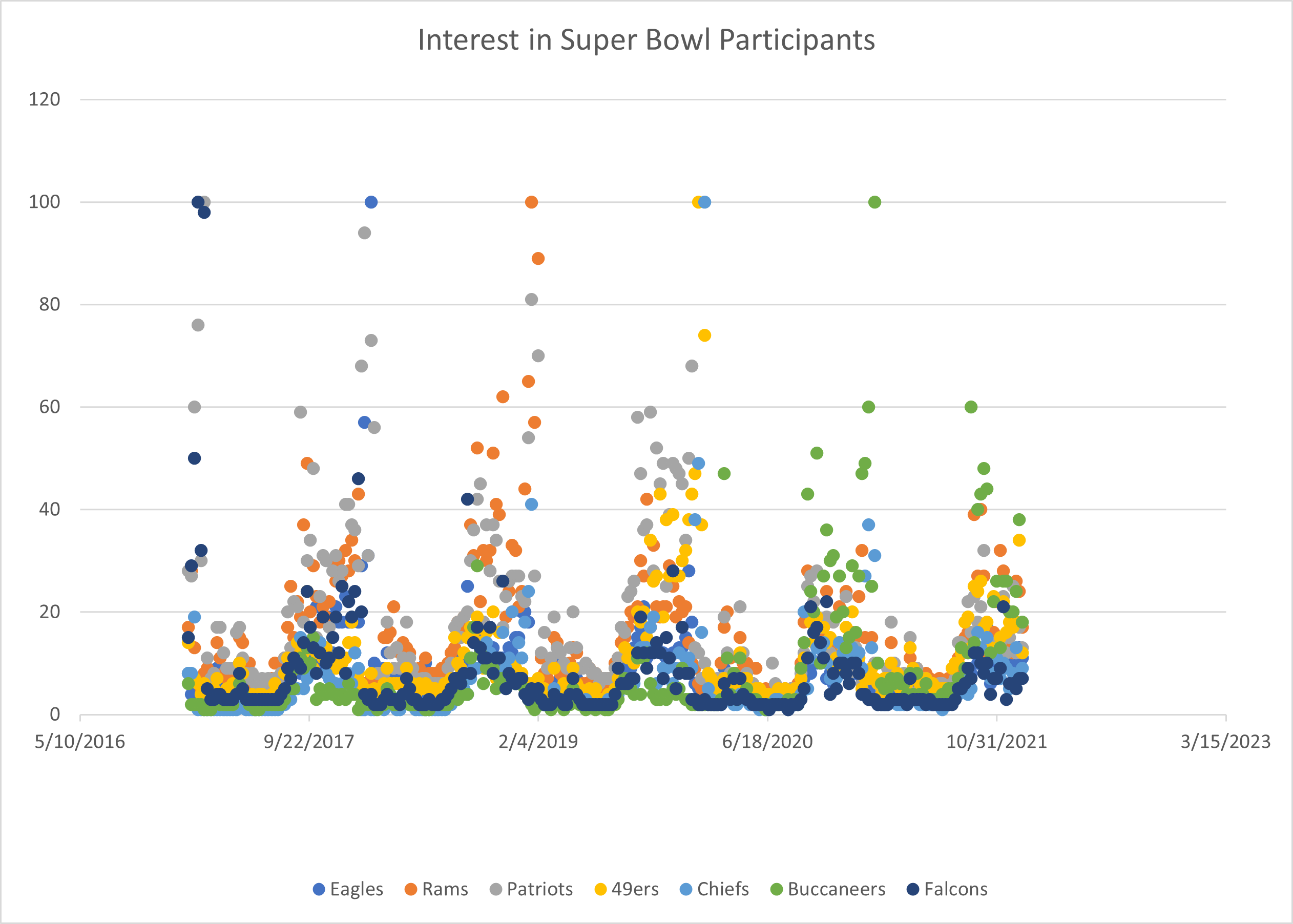 Moving to the second major component of the NFL’s pinnacle event, the Pepsi Super Bowl Halftime Show. Each year a musical act headlines the event, which we have tracked in the graph below. Interestingly, while interest boomed for each artist — Lady Gaga (2017), Justin Timberlake (2018), Maroon 5 (2019), Shakira (2020), The Weeknd (2021) — during the week of the event, the traction proved short-lived. None of the artists experienced a lasting increase in search interest in the months and years following the halftime show. One explanation is that the massive burst of interest resulted in YouTube subscriber growth and increased visibility on streaming platforms like Spotify, Apple Music, and Pandora. 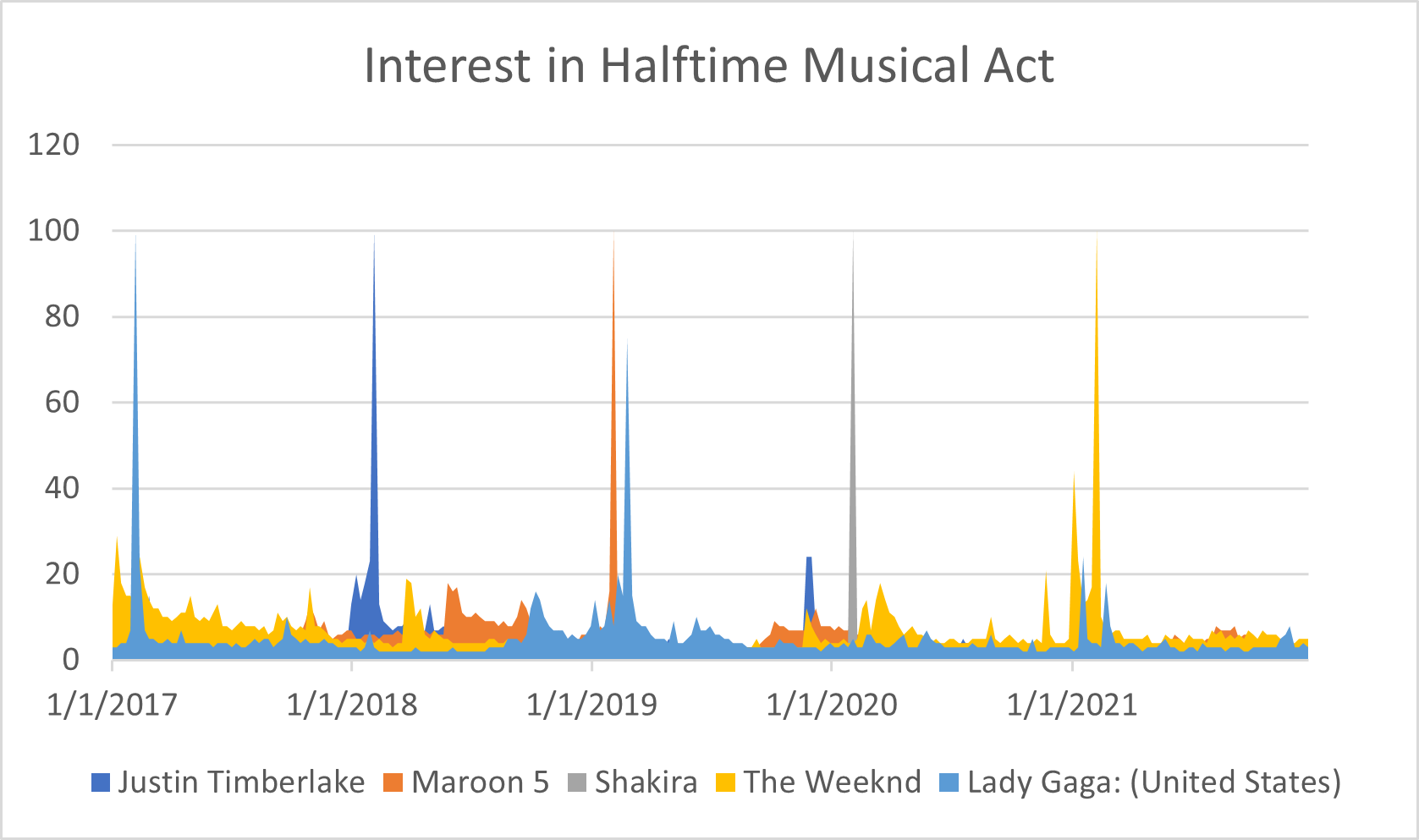 To examine the might of Super Bowl advertising, we pulled the five most viral commercials that appeared during the 2021 Super Bowl and plugged them into Google Trends. The commercials were from Budweiser, Paramount Plus, Jeep, Uber Eats, and Cadillac. Together, the five videos were the most viewed on YouTube in the weeks that followed the big game. Uber Eats was the only company to see sustained improvements in interest and brand awareness in the days that followed the airing of the commercial. In fact, Budweiser and Paramount Plus saw precipitous drops in interest during the following week. 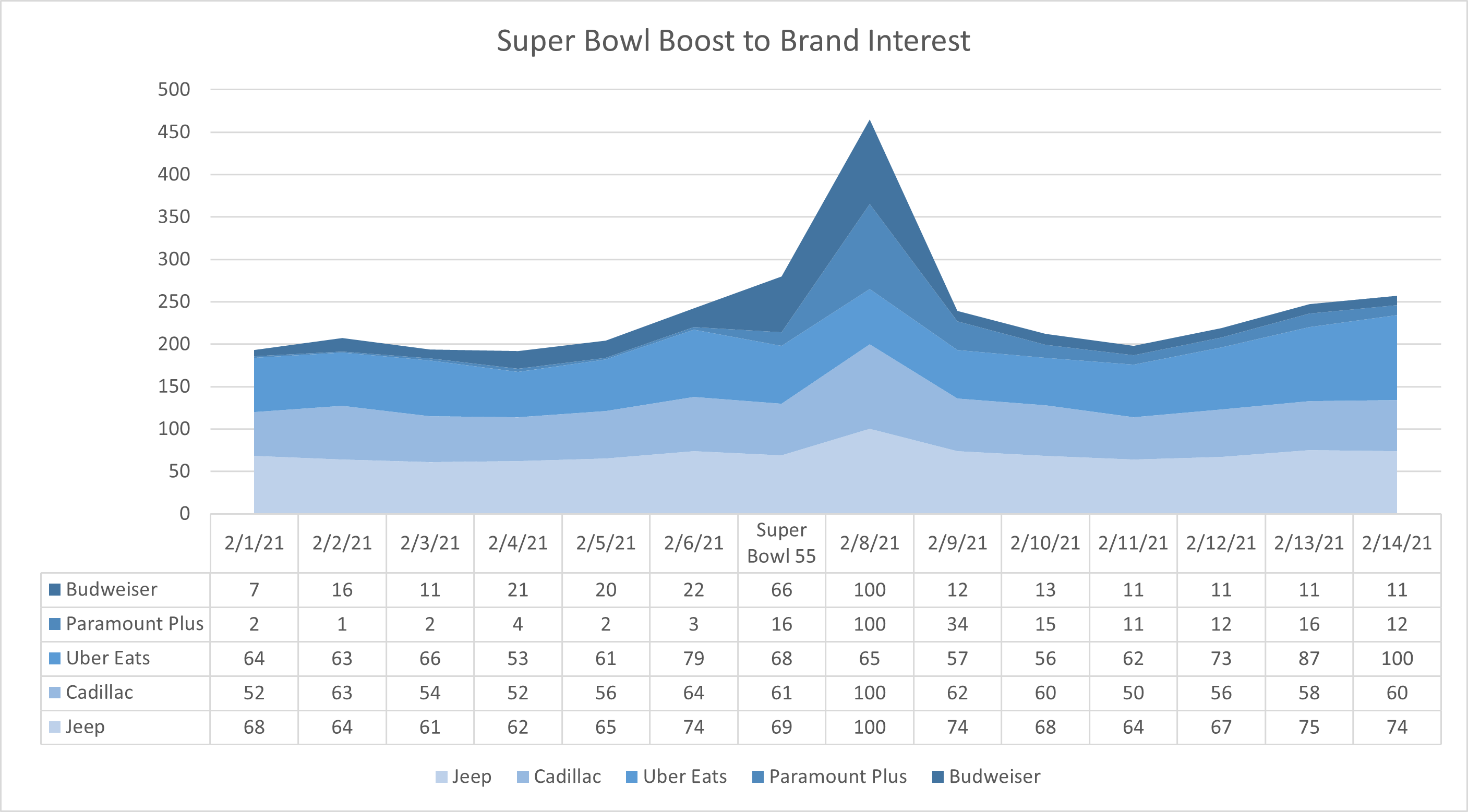 Arriving at one of the biggest displays of might, the Super Bowl can catapult interest in the word ‘squares’. Keep in mind, Google Trends considers all search queries pertaining to these terms, relevant to the Super Bowl or not. In this instance, the inclusion in the sports betting term ‘Super Bowl squares’ is enough to boost interest. One other item to point out is the term ‘NFL odds’ peaks twice a year – the first week of the NFL season and the last.

It is also important to keep in mind that sports gambling is exploding, with many states legalizing betting outside of casinos. It does not seem farfetched to forecast mobile sports gambling to overtake squares and prop bets in the next few years in popularity. Additionally, with an explosion of apps, there will continue to be an increase in opportunities for marketers to capitalize on in-app advertisements and display ads on these platforms. 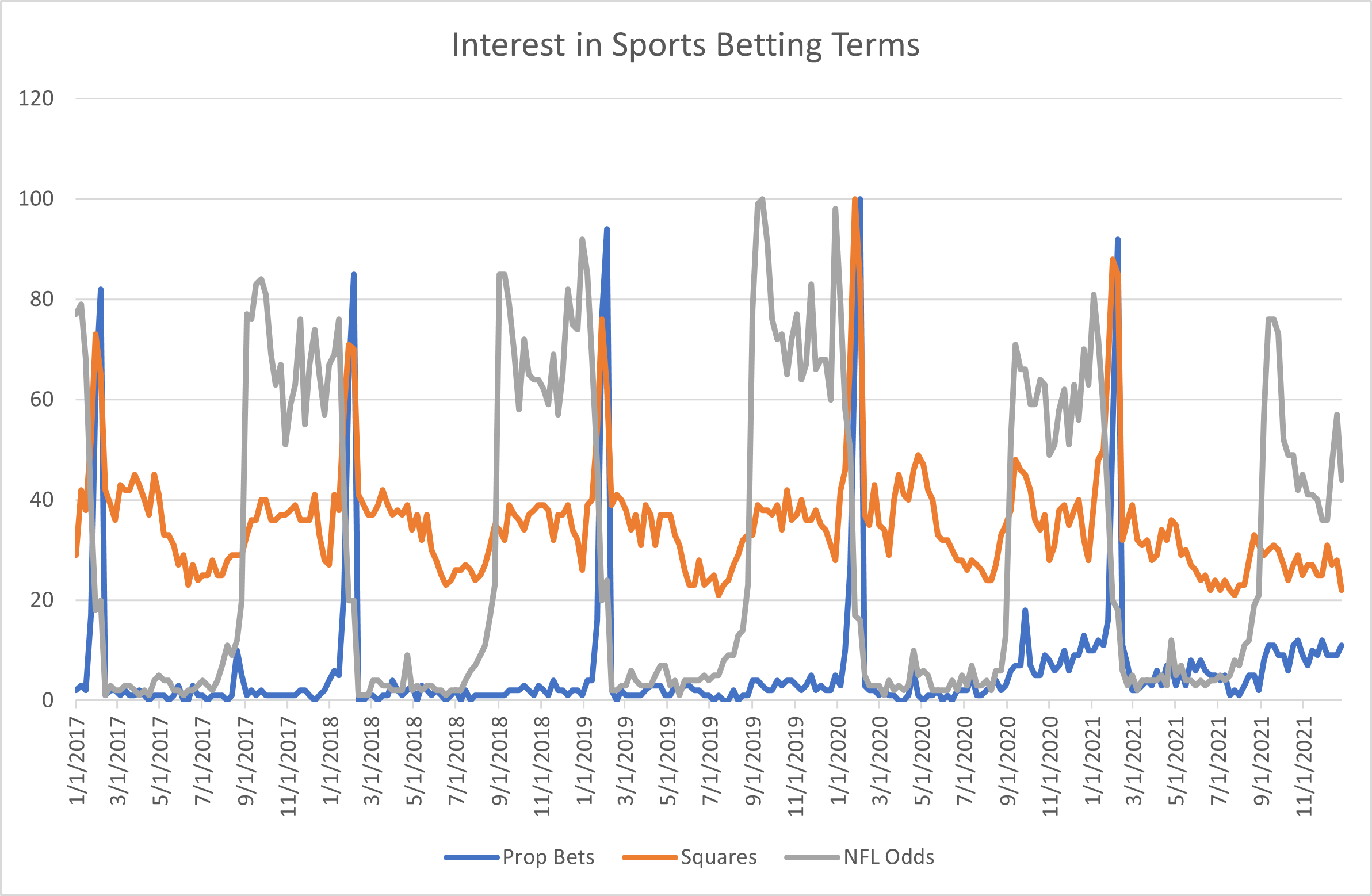 Finally, we landed on the party aspect of the Super Bowl. This was the only category that appeared to be affected by the pandemic, with interest in several terms tempered during the 2020 lockdown. However, we did find a strong correlation with nachos, dips, snacks, and recipes lining up with the date of the big game every year. Most interesting, tailgating was found to be either at or near a year-low in interest when the Super Bowl arrives. Most football fans are ready to ditch the frozen tundra for a couch, beverages, and a TV by the time February rolls around. 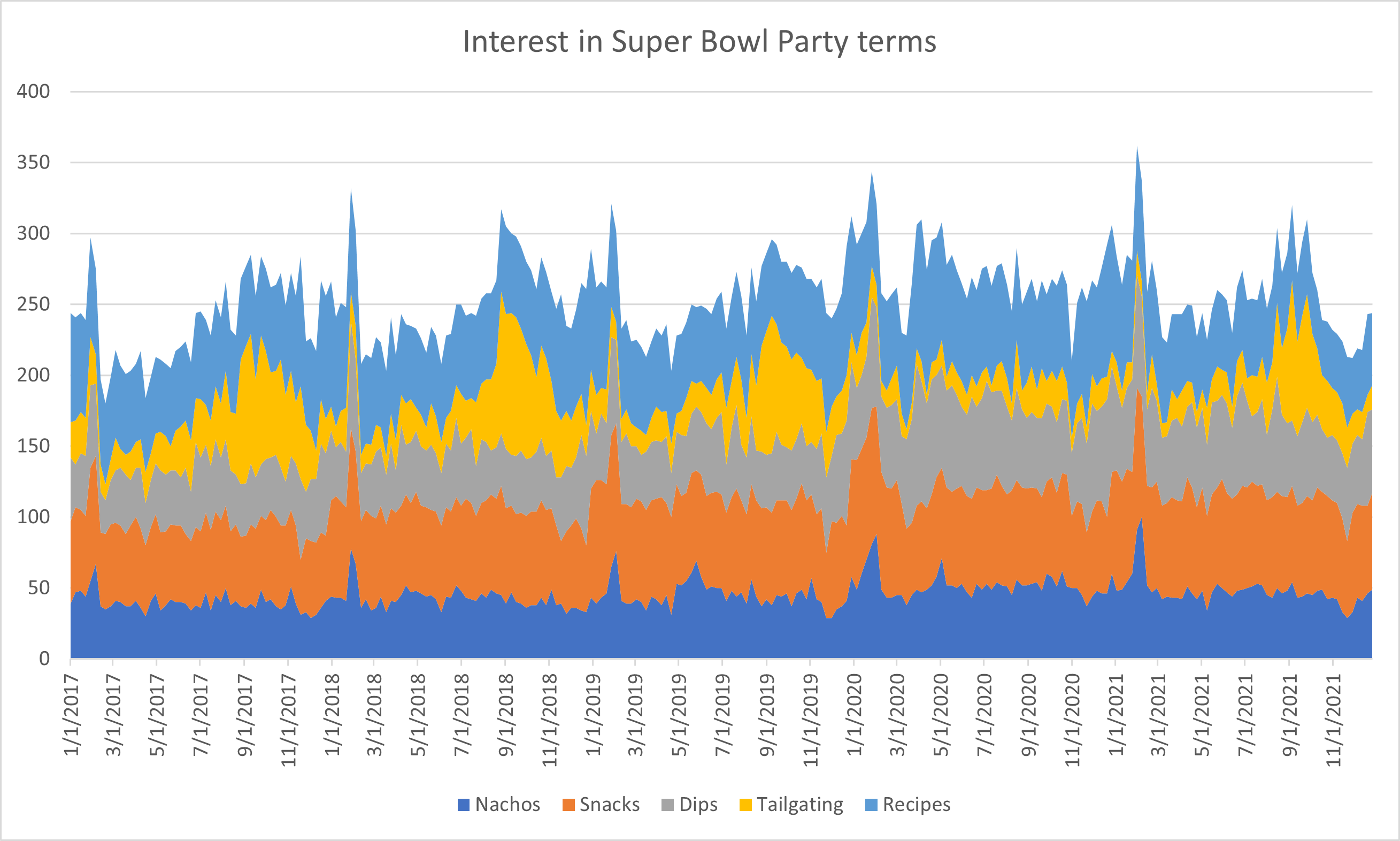 As noted above, viewership dipped to its lowest level since 2007 for last year’s Super Bowl. However, streaming of the game continues to climb in a steep upward trajectory, recording an all-time high of 5.7 million streams in 2021. By comparison, 91 million viewers watched on traditional cable. The decline in cable viewership coupled with the increase in streaming numbers is set to continue in 2022. Which is reason to consider CTV a viable candidate to include in a marketing mix. 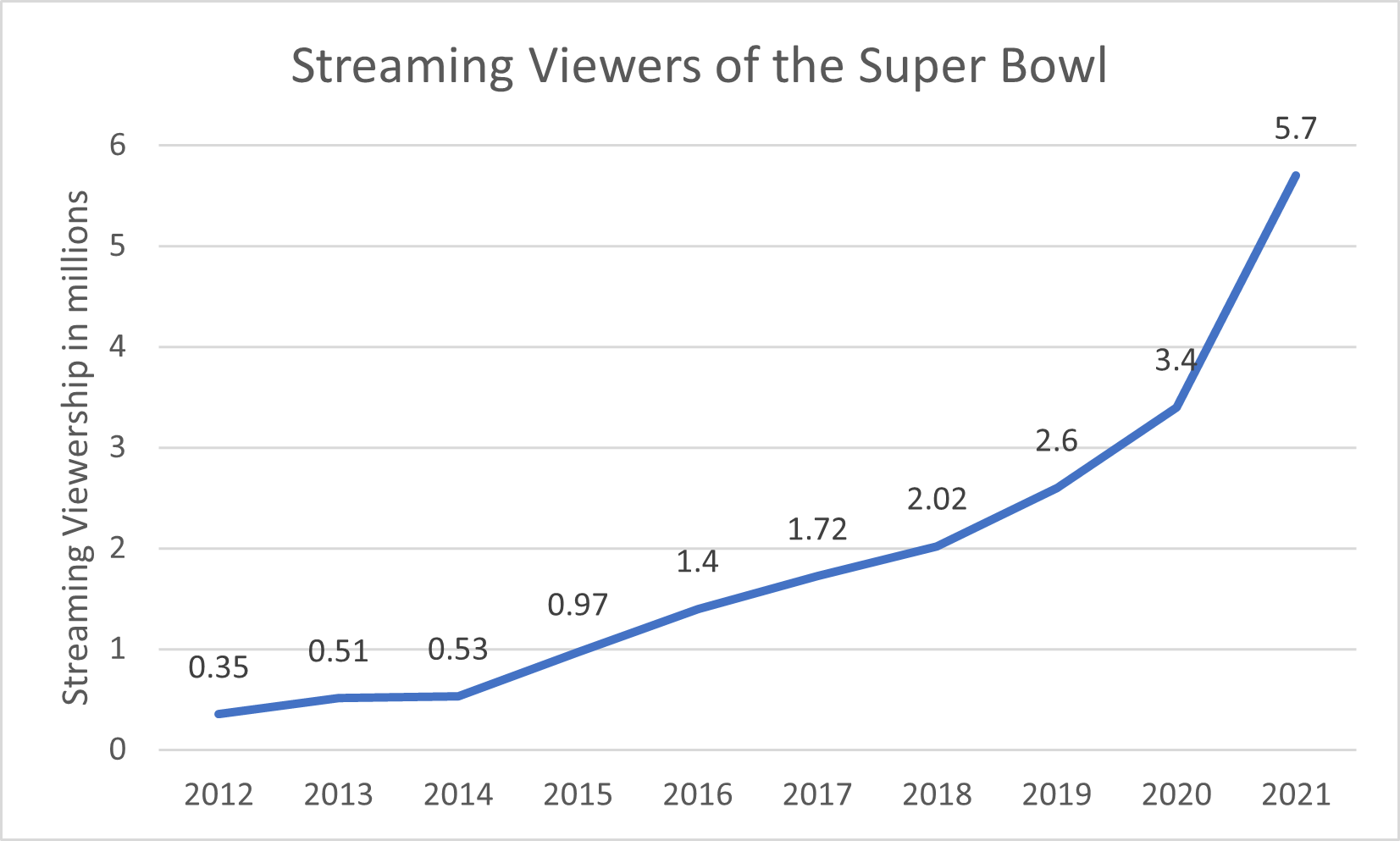 Continually finding terms that spike in interest with correlation to major events each year is a major asset when formulating marketing campaigns and editorial calendars. The Super Bowl is just one example of a yearly event that draws significant interest across demographics. Identifying events that share a demographic with your target audience will improve your content marketing and engagement with your consumer. If you’re interested in partnering with a proactive digital agency that values trust, confidence, and creativity, you can reach out to us at Sales@LeverInteractive.com. We’re looking forward to helping you with your digital marketing needs, in 2022 and beyond.

If you’re looking for a different agency experience, look no further.
LET'S TALK

Are you ready for a different agency experience? Let’s talk.